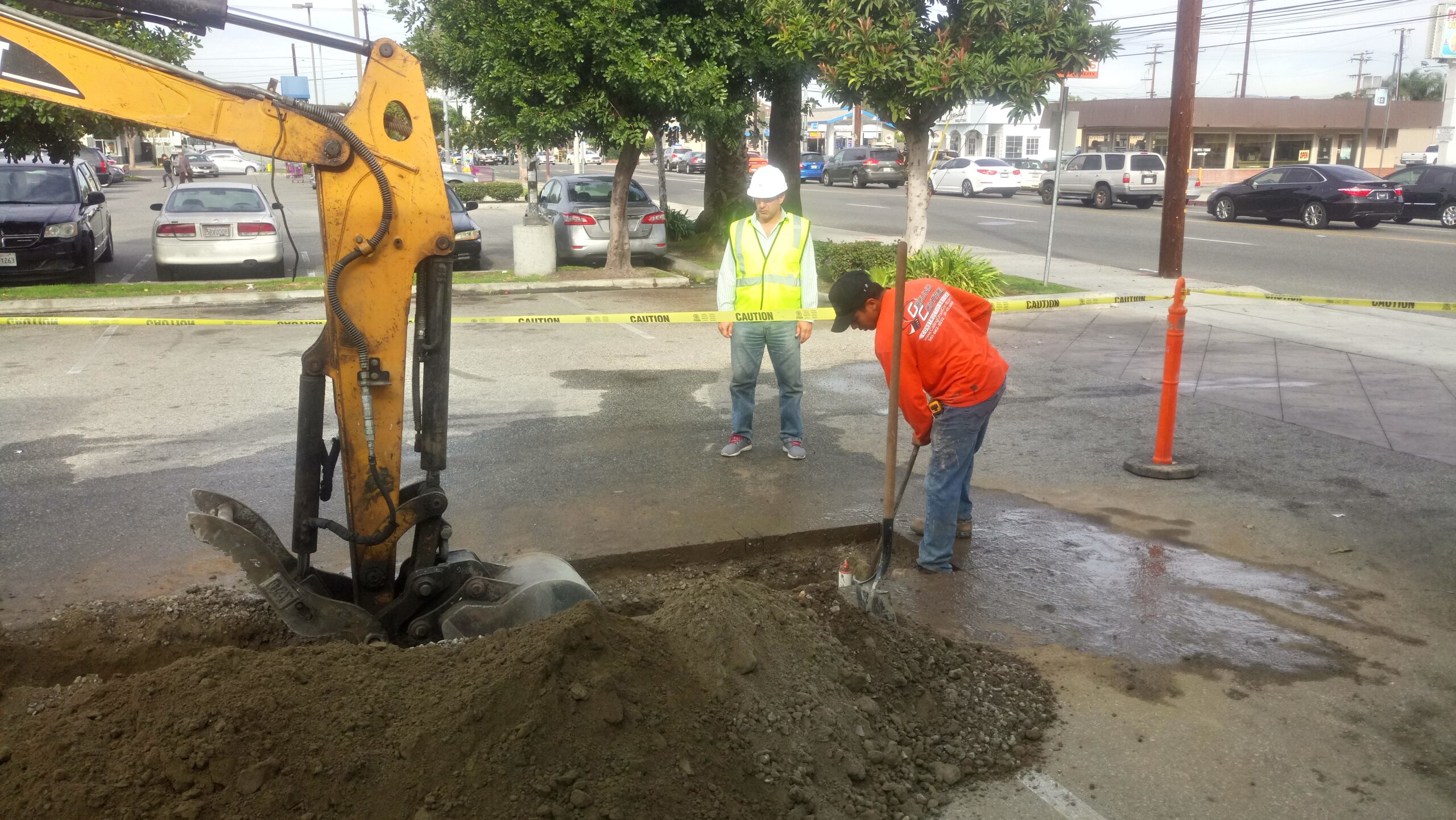 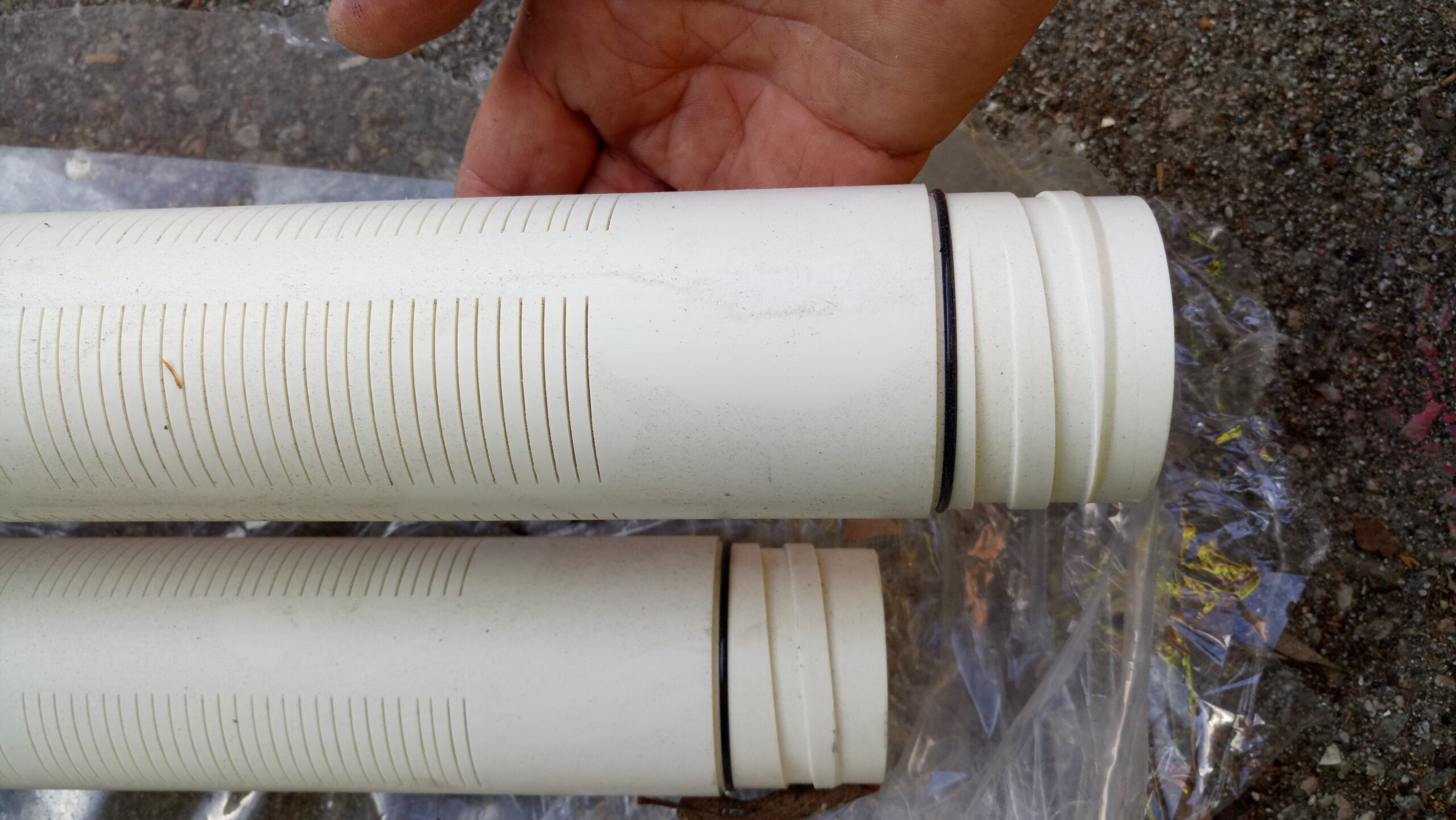 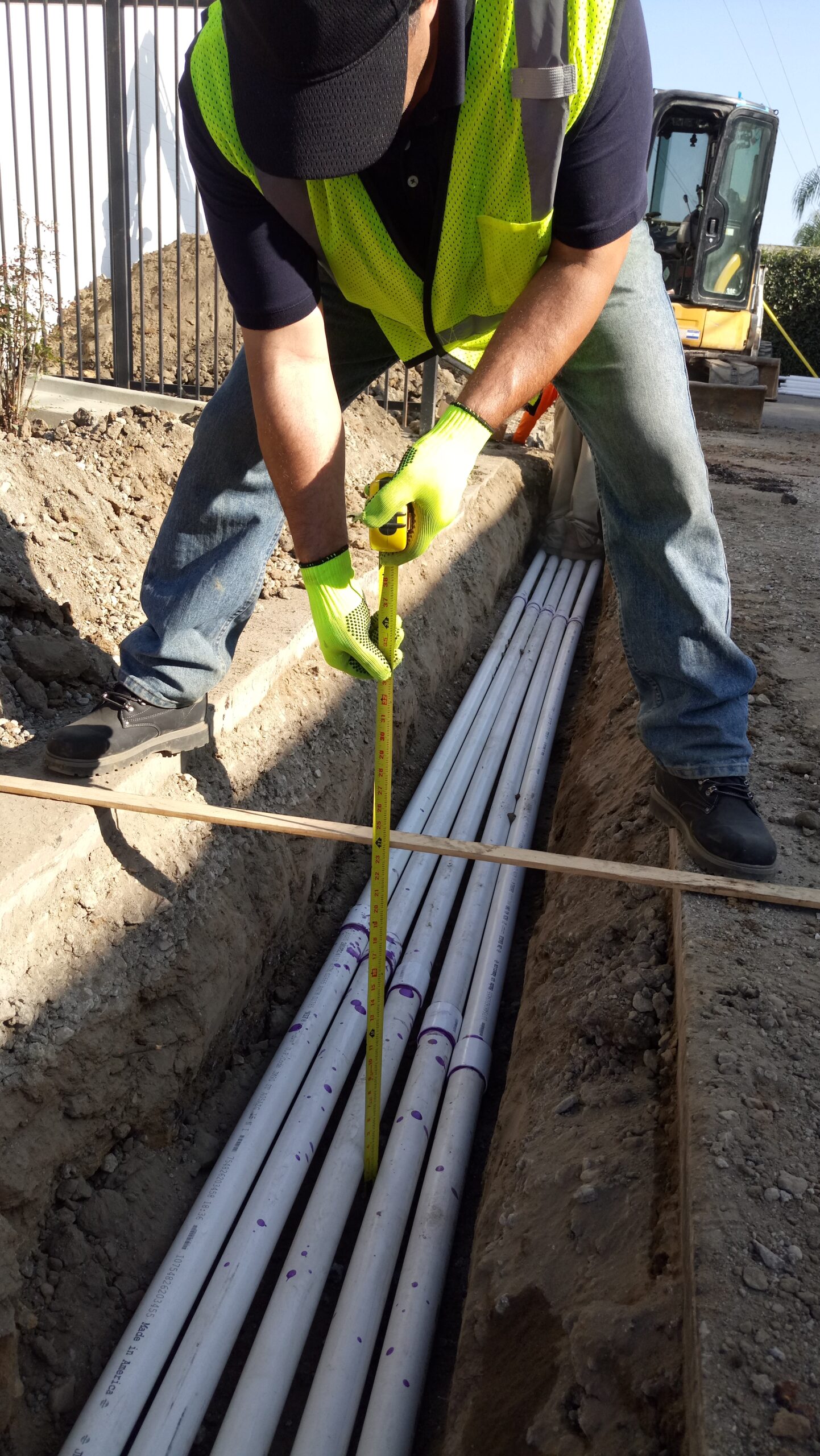 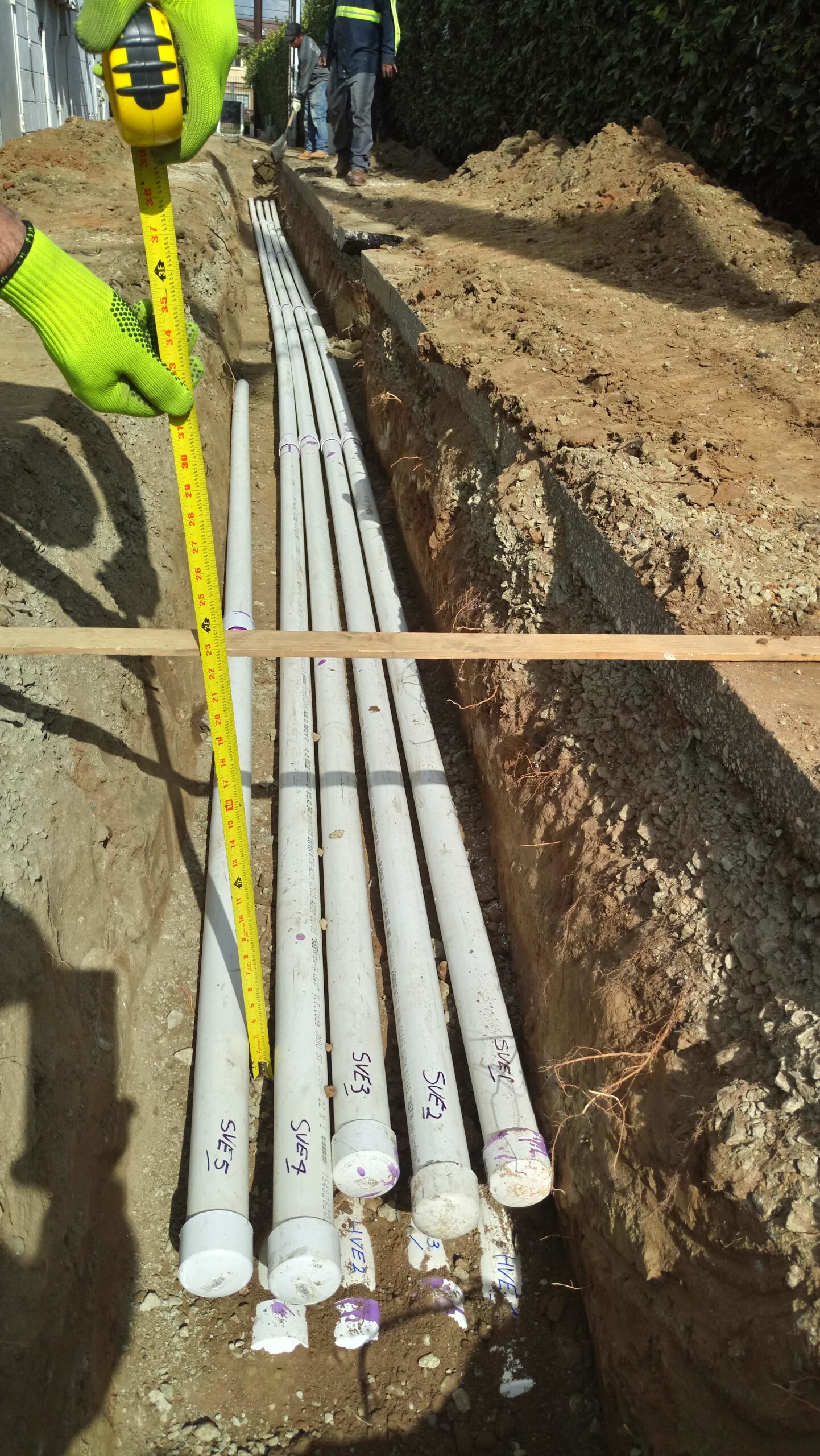 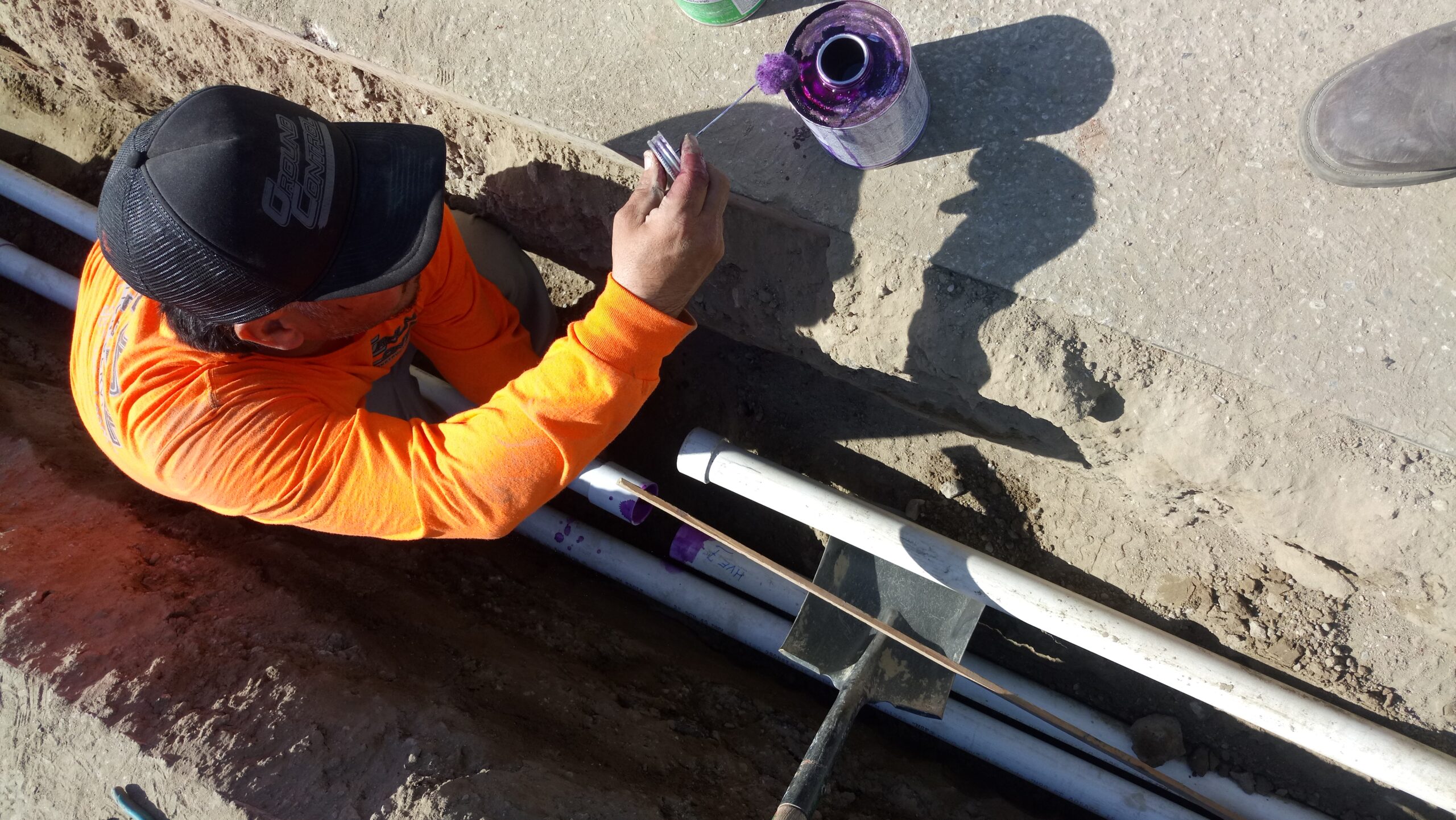 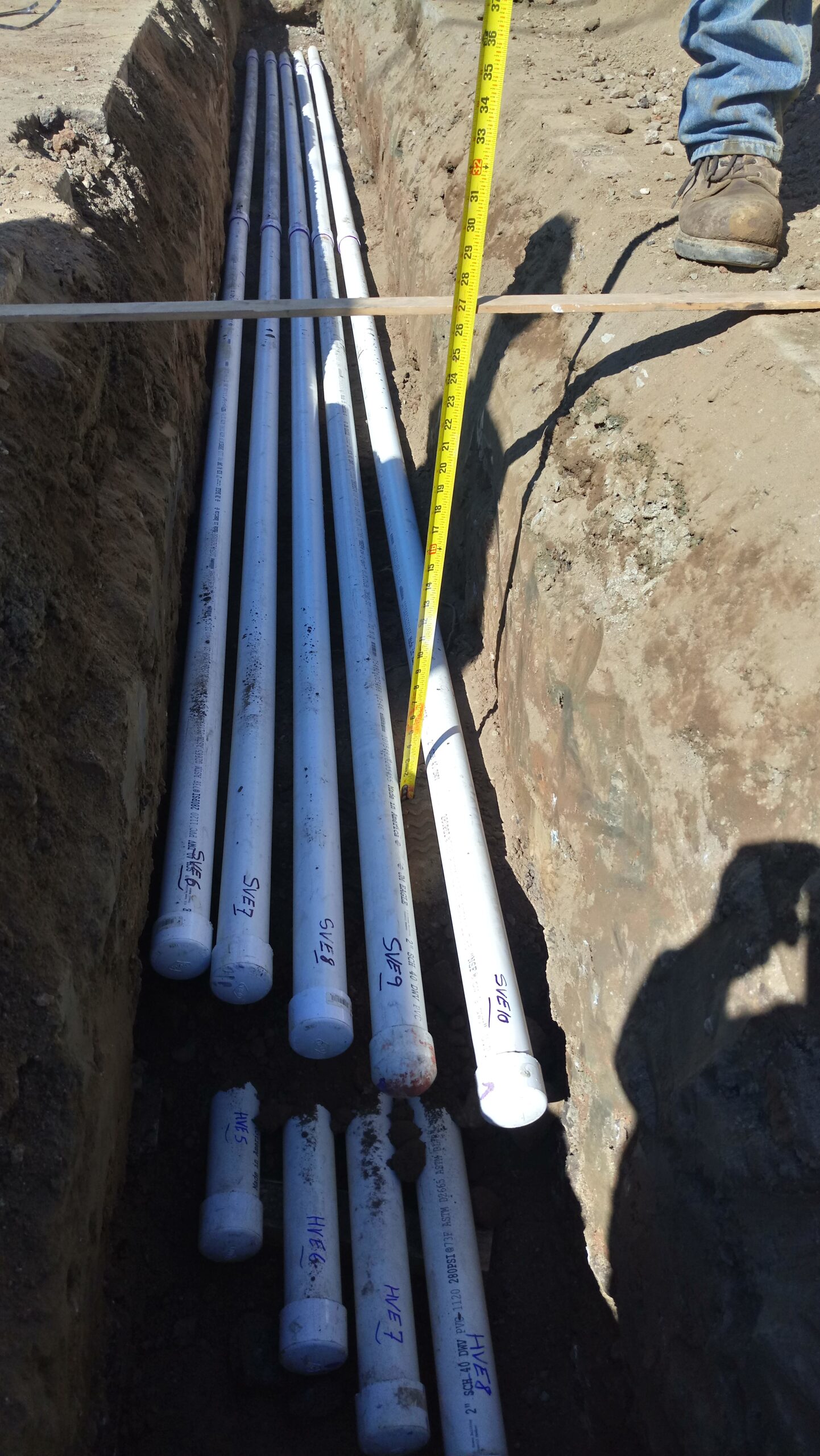 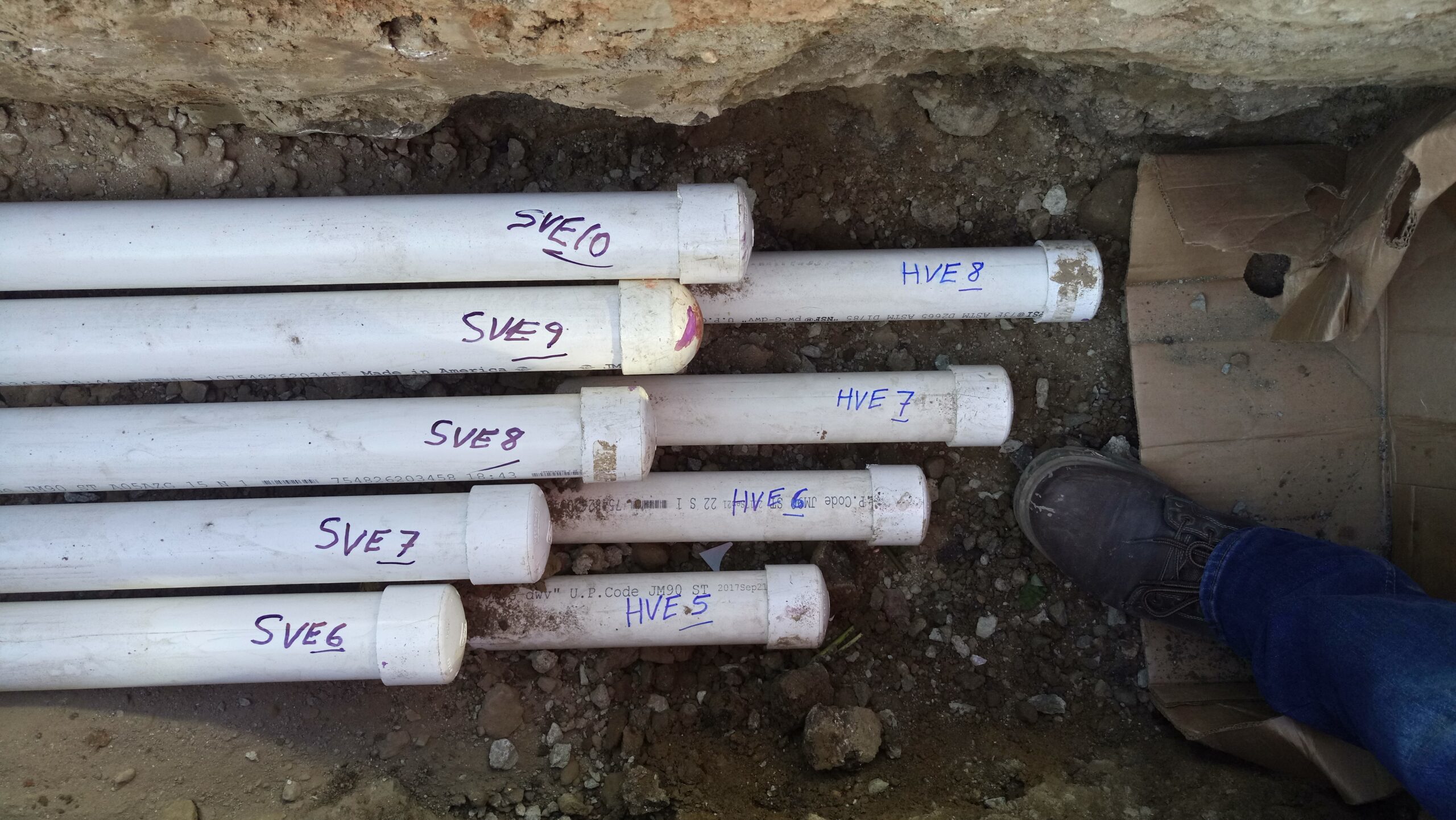 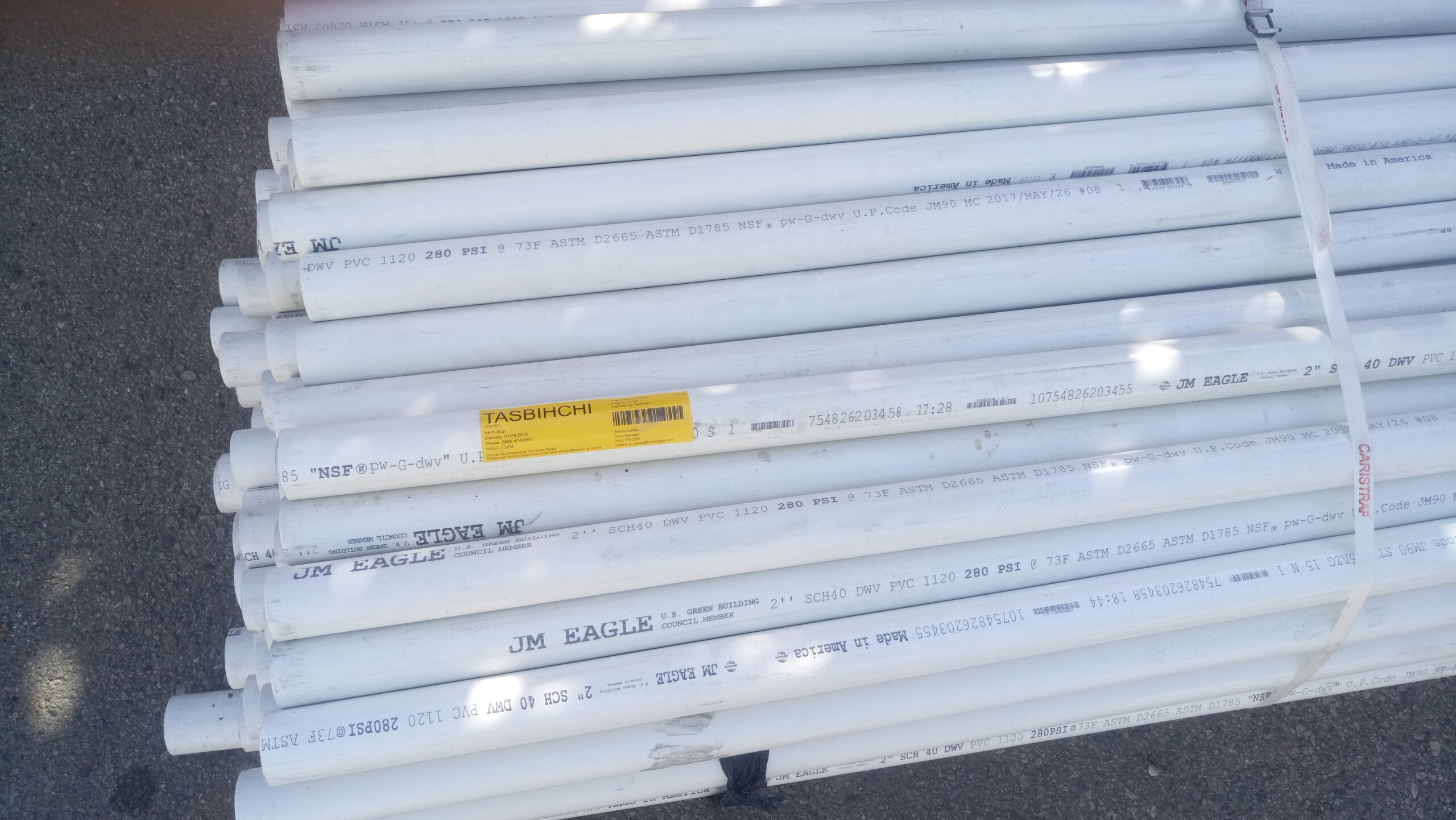 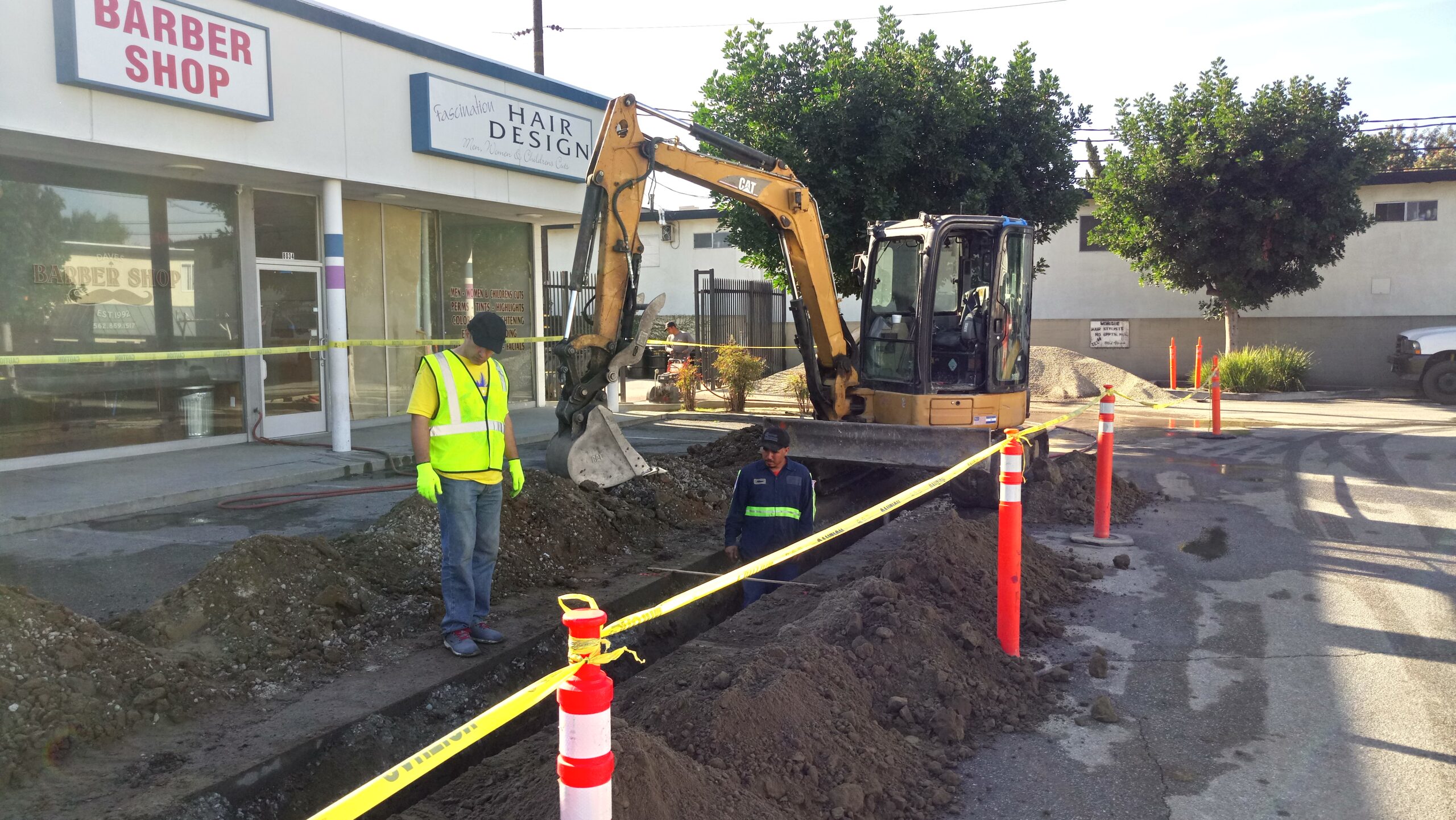 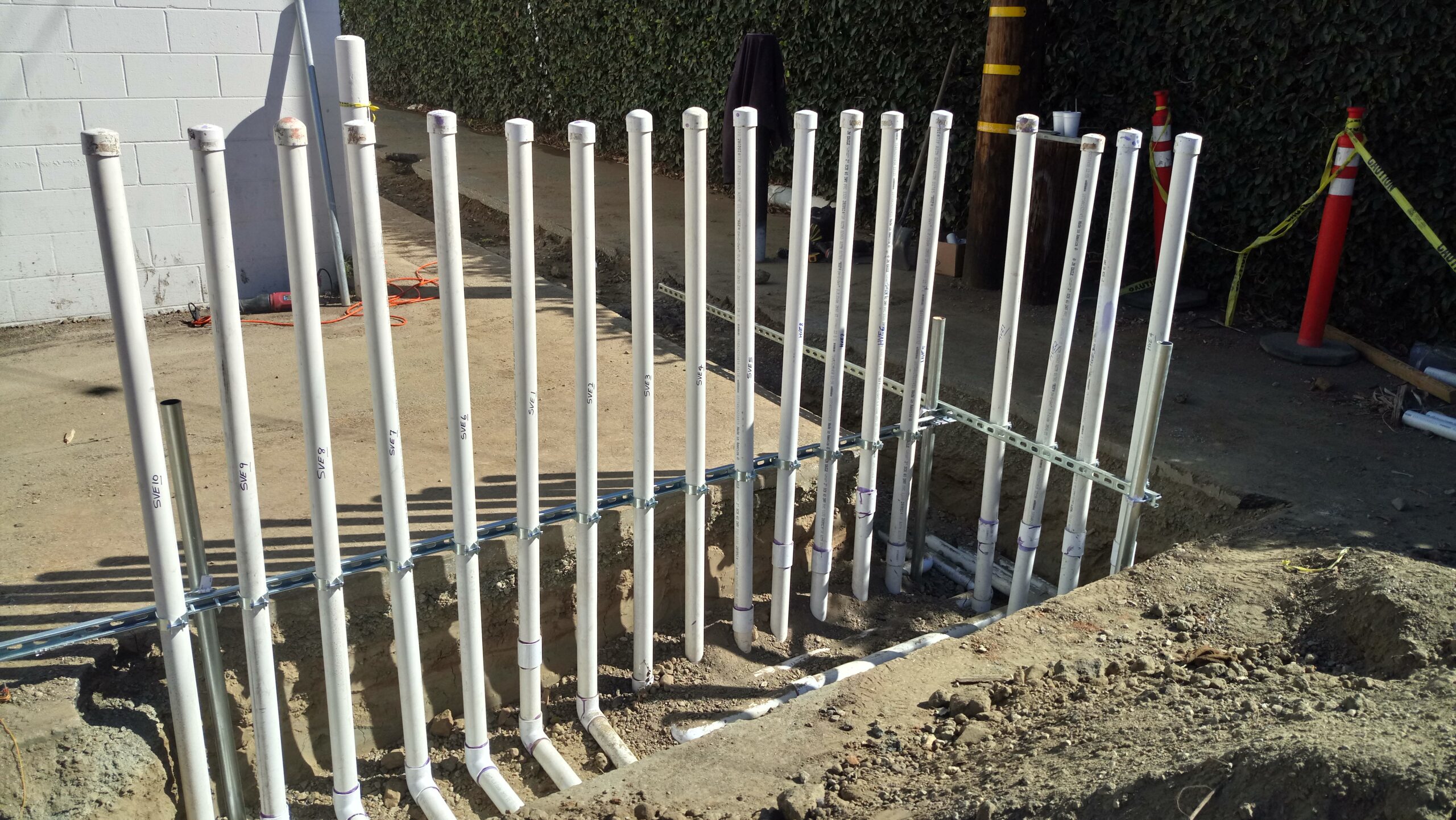 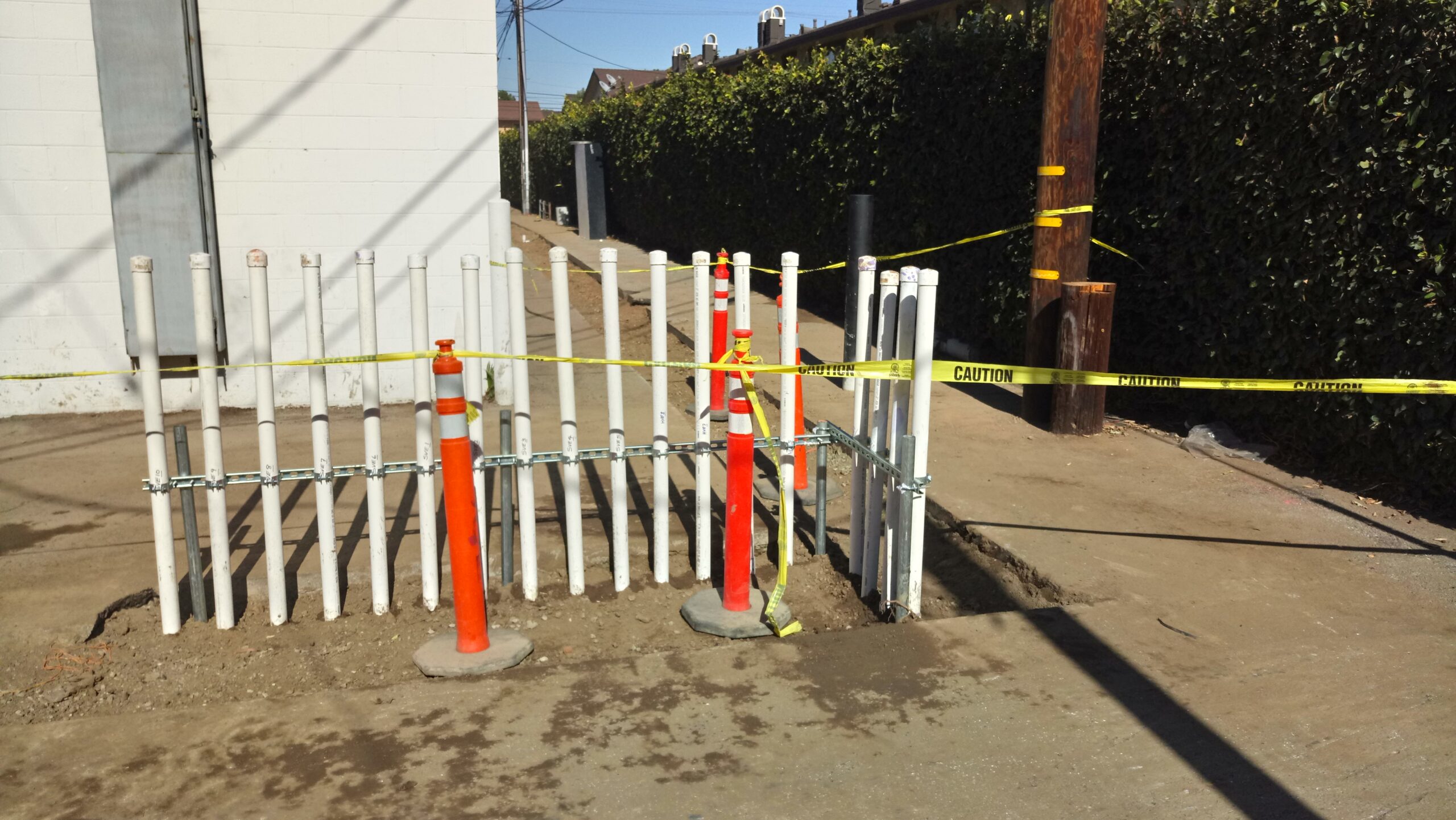 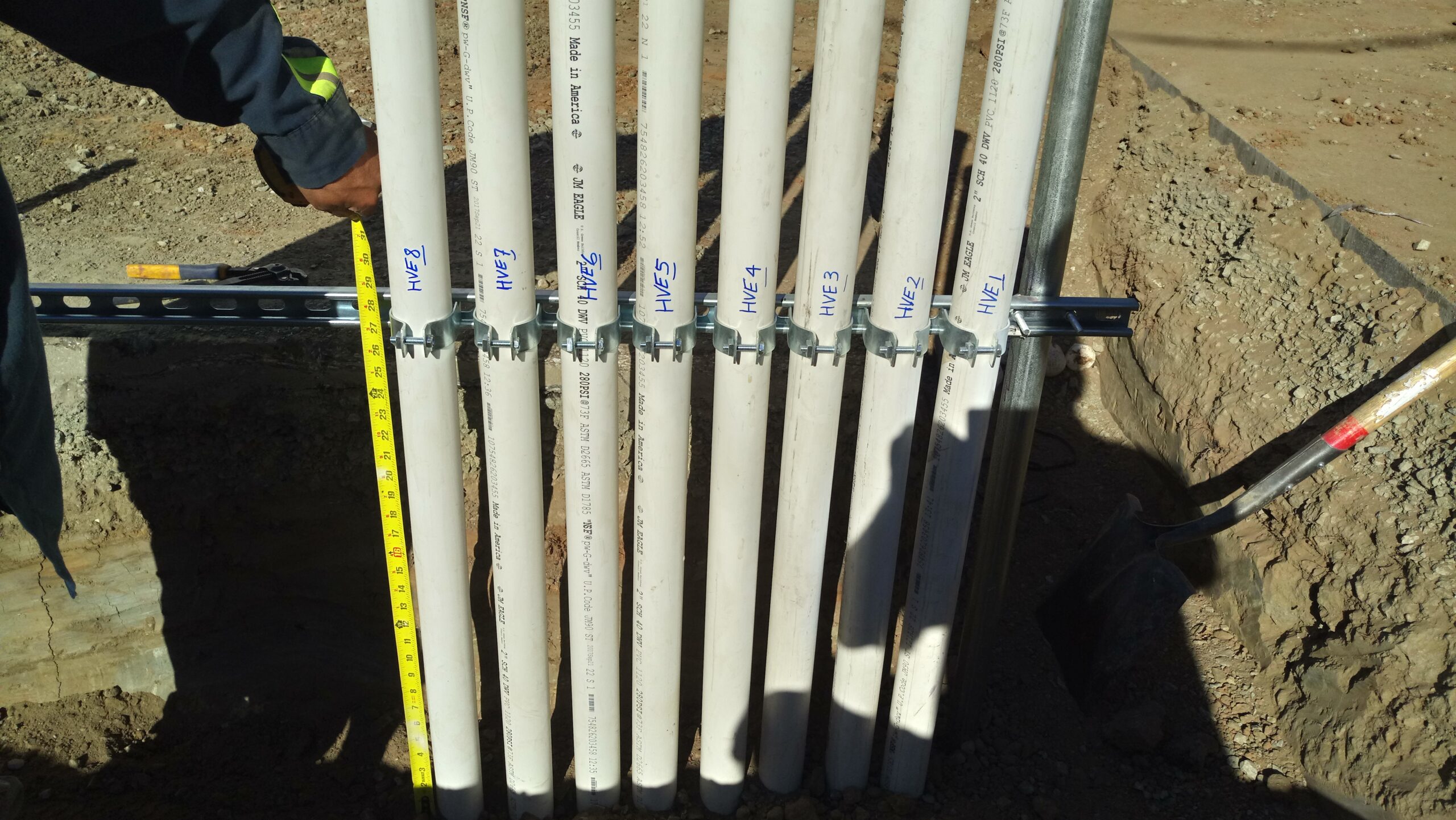 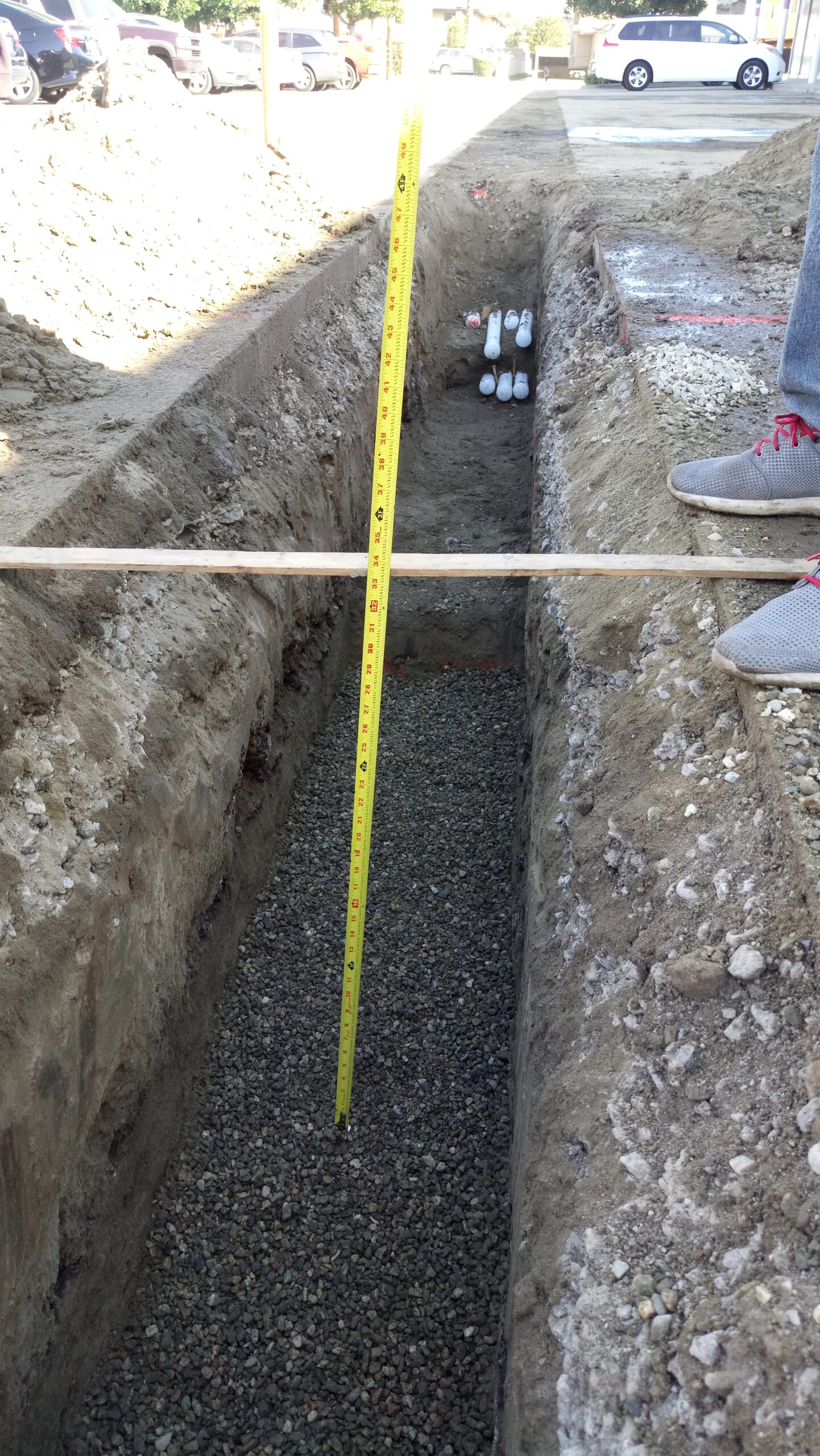 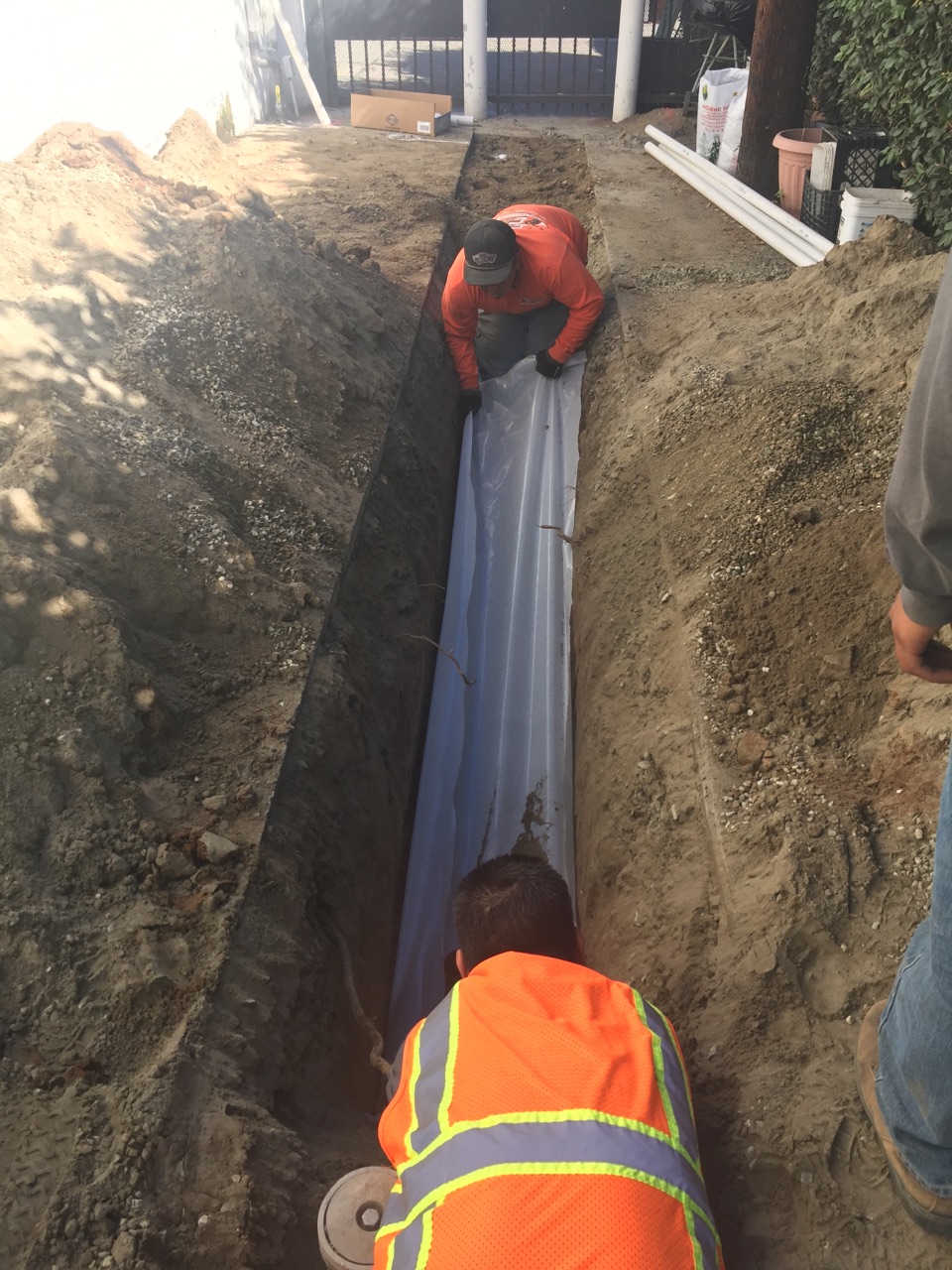 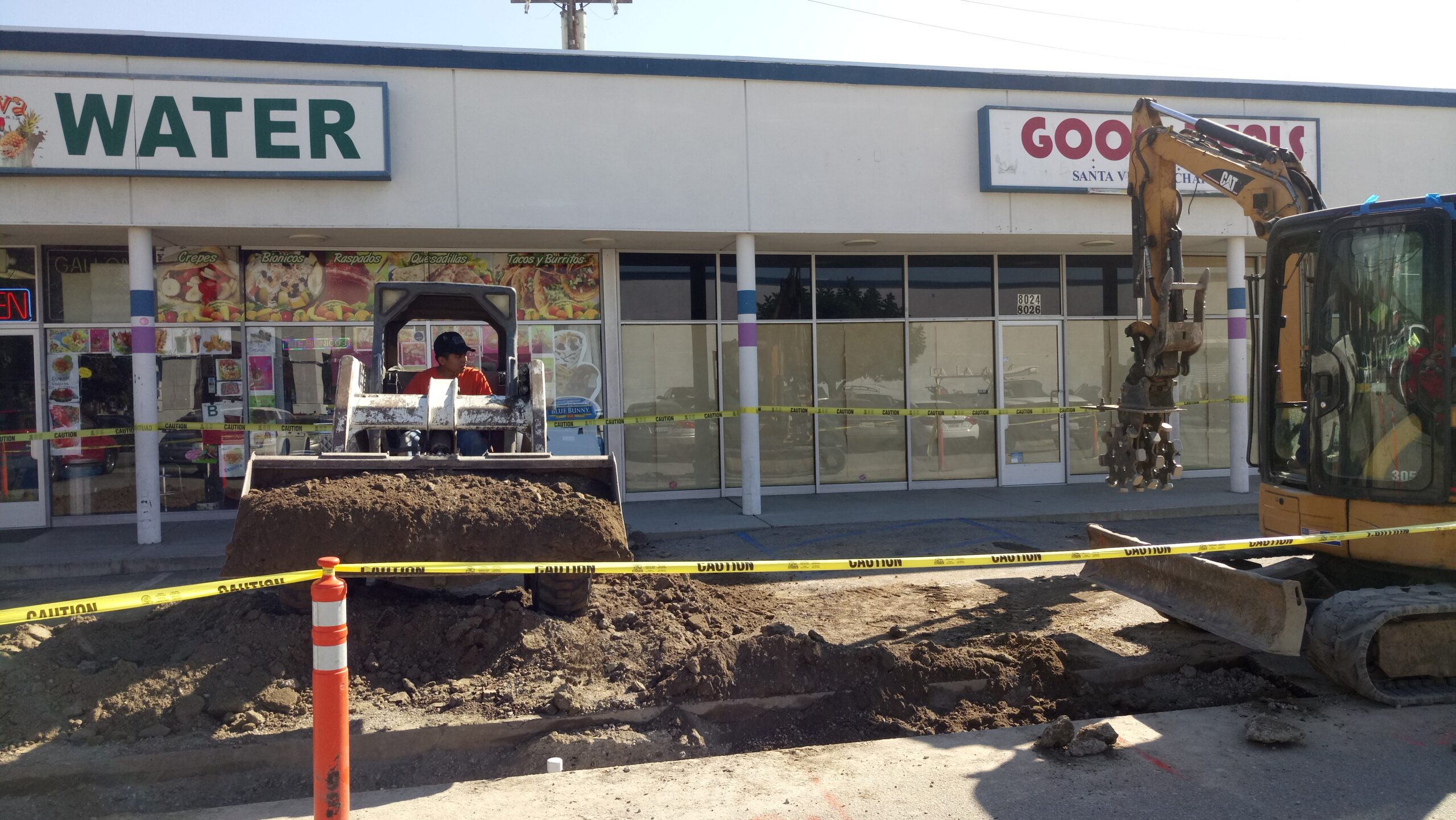 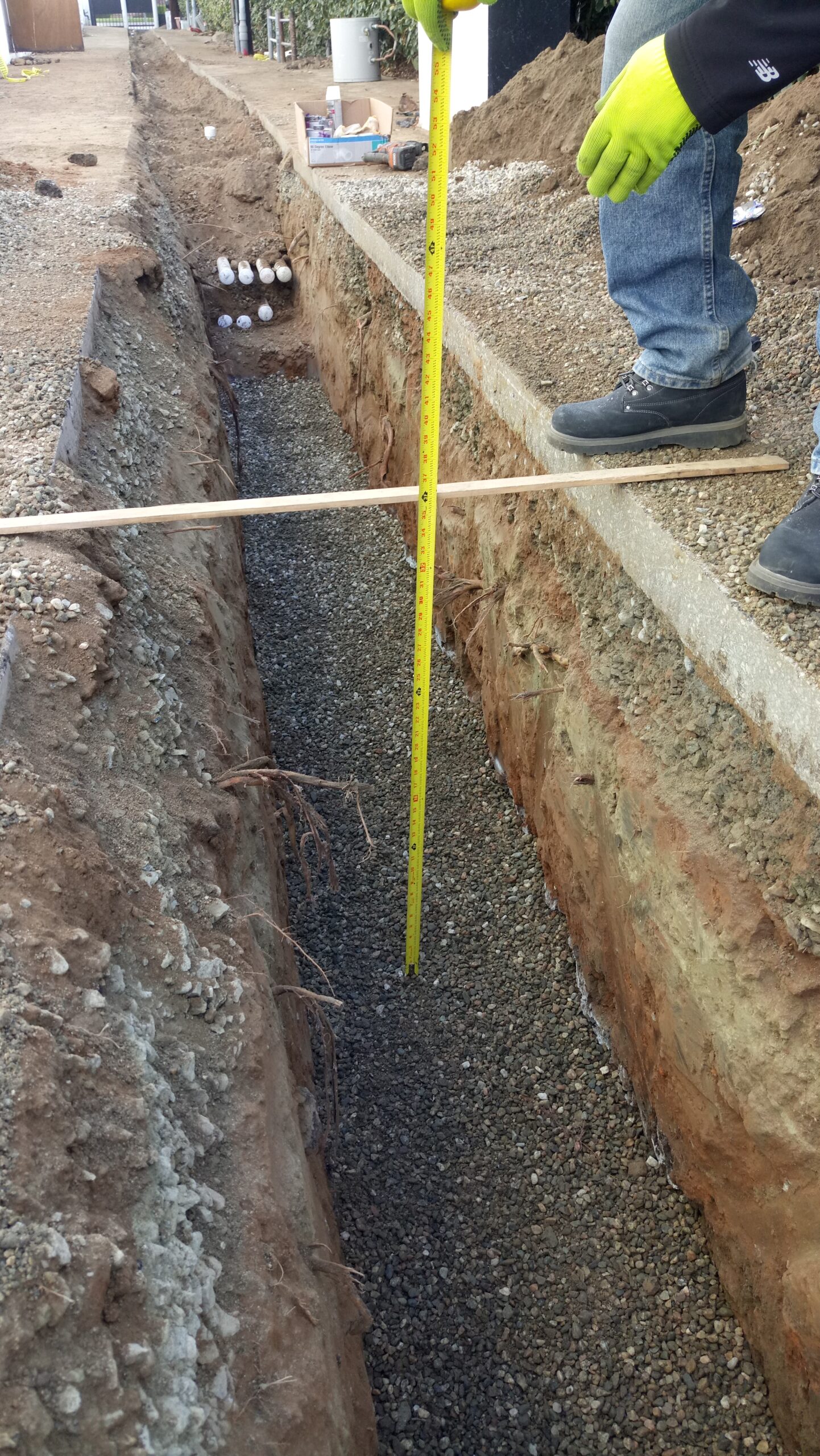 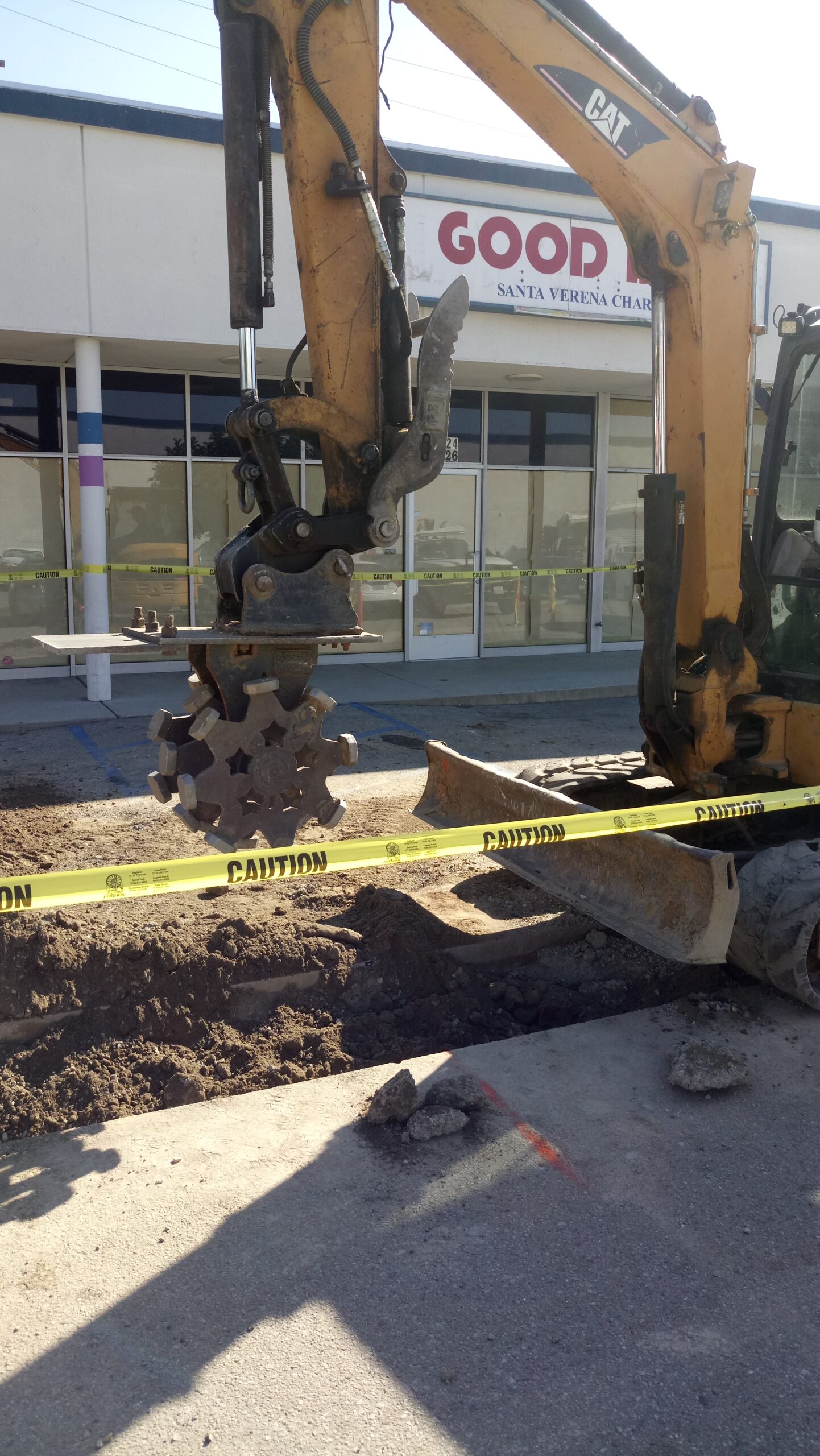 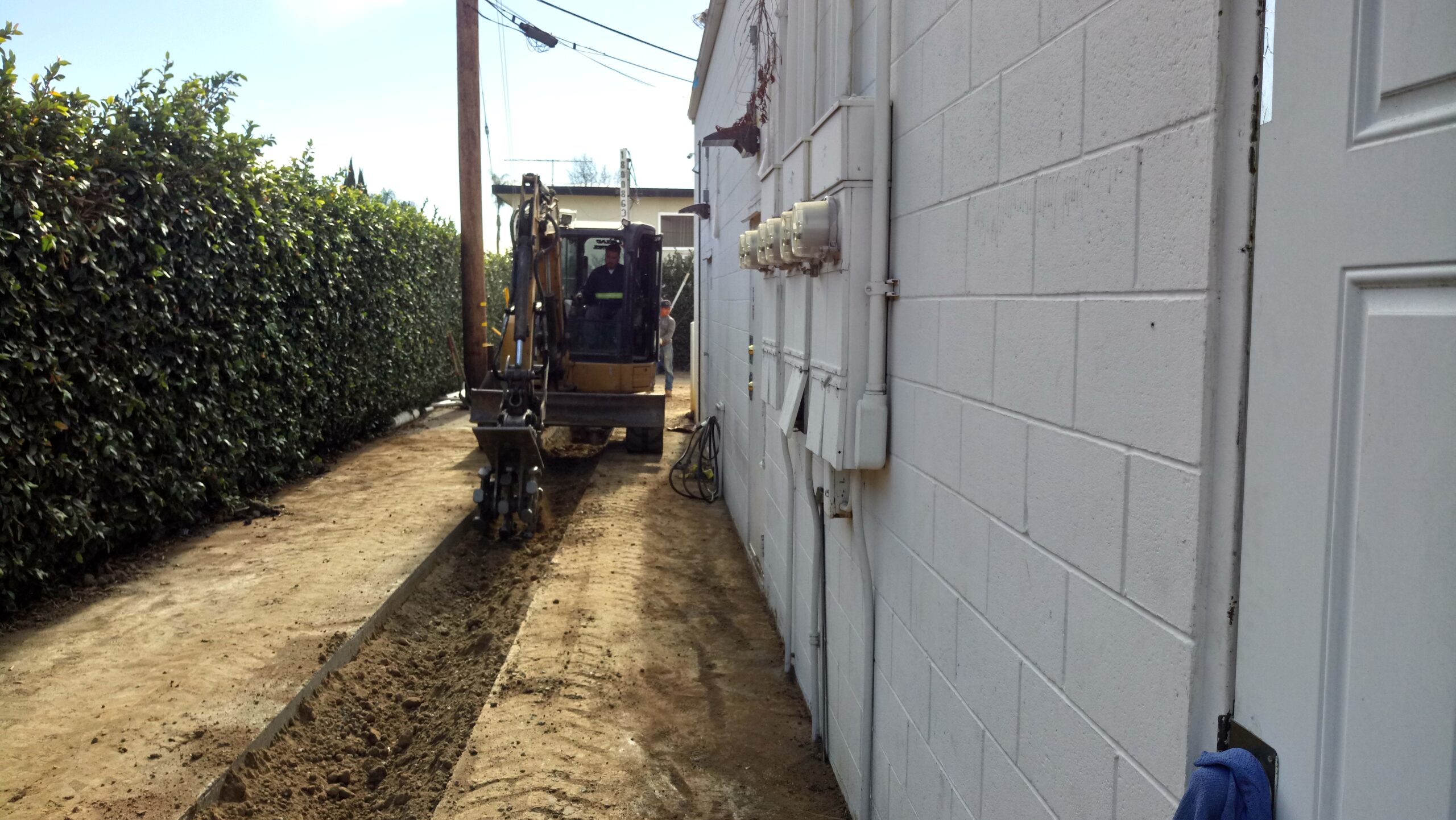 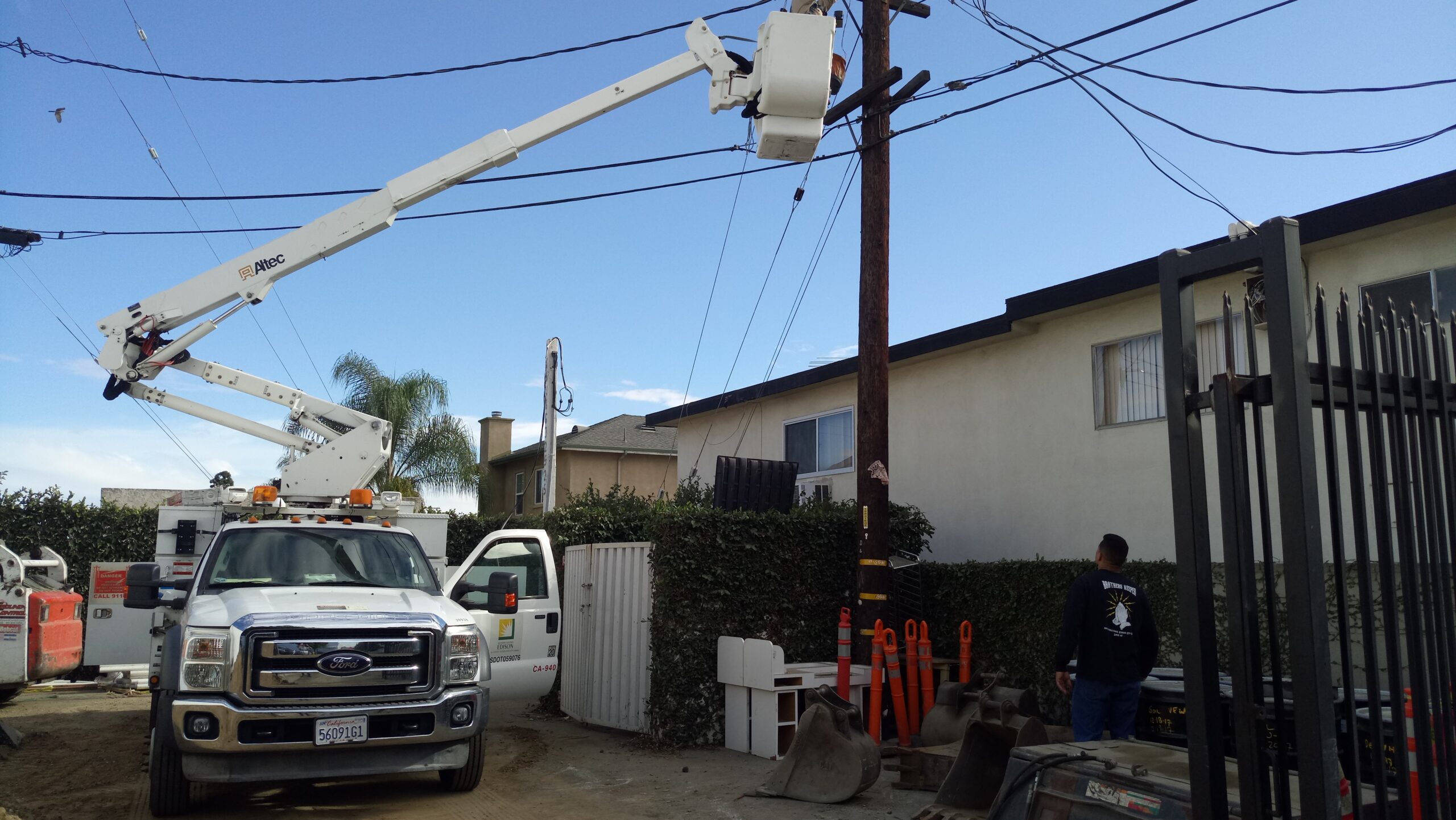 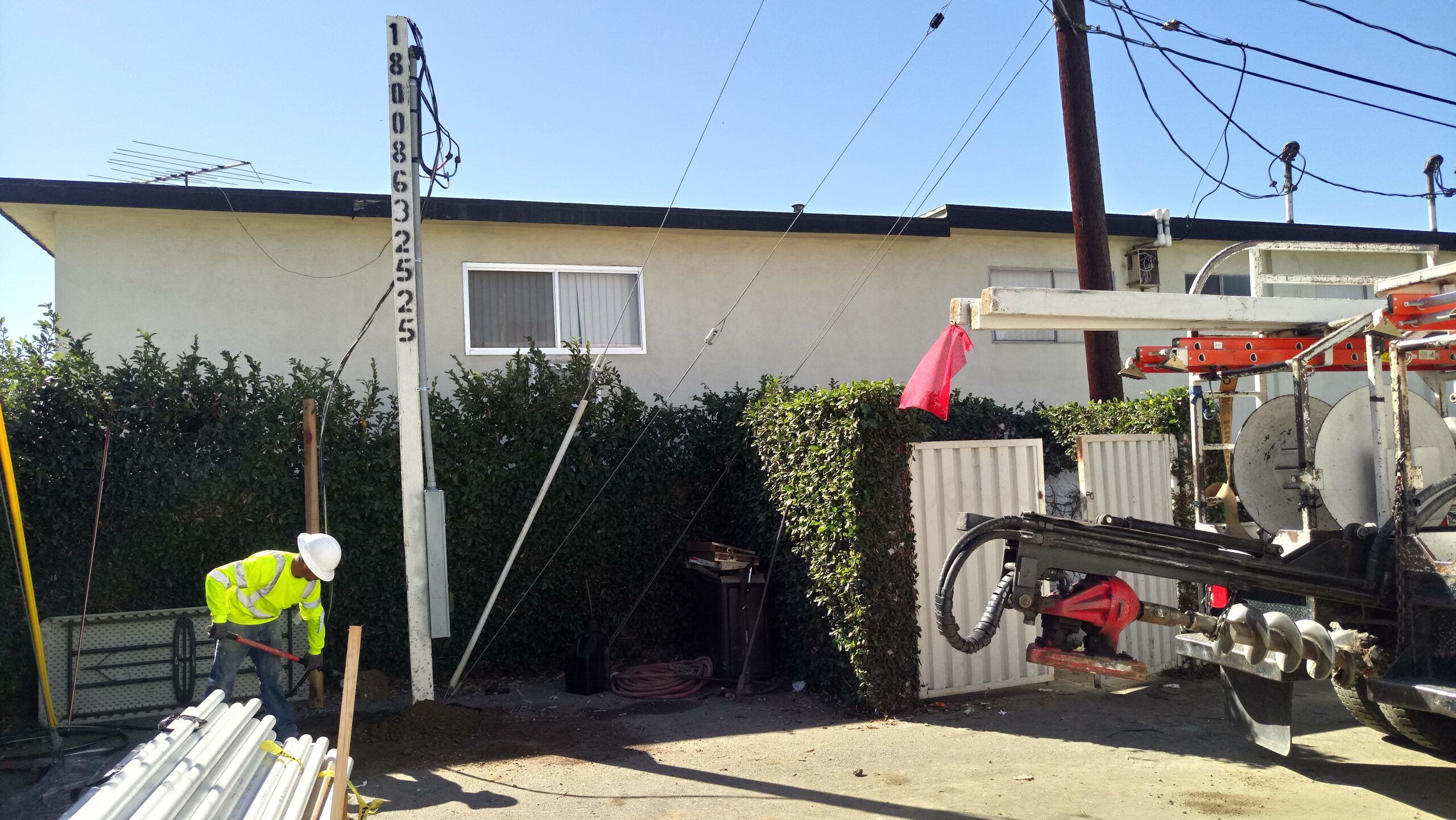 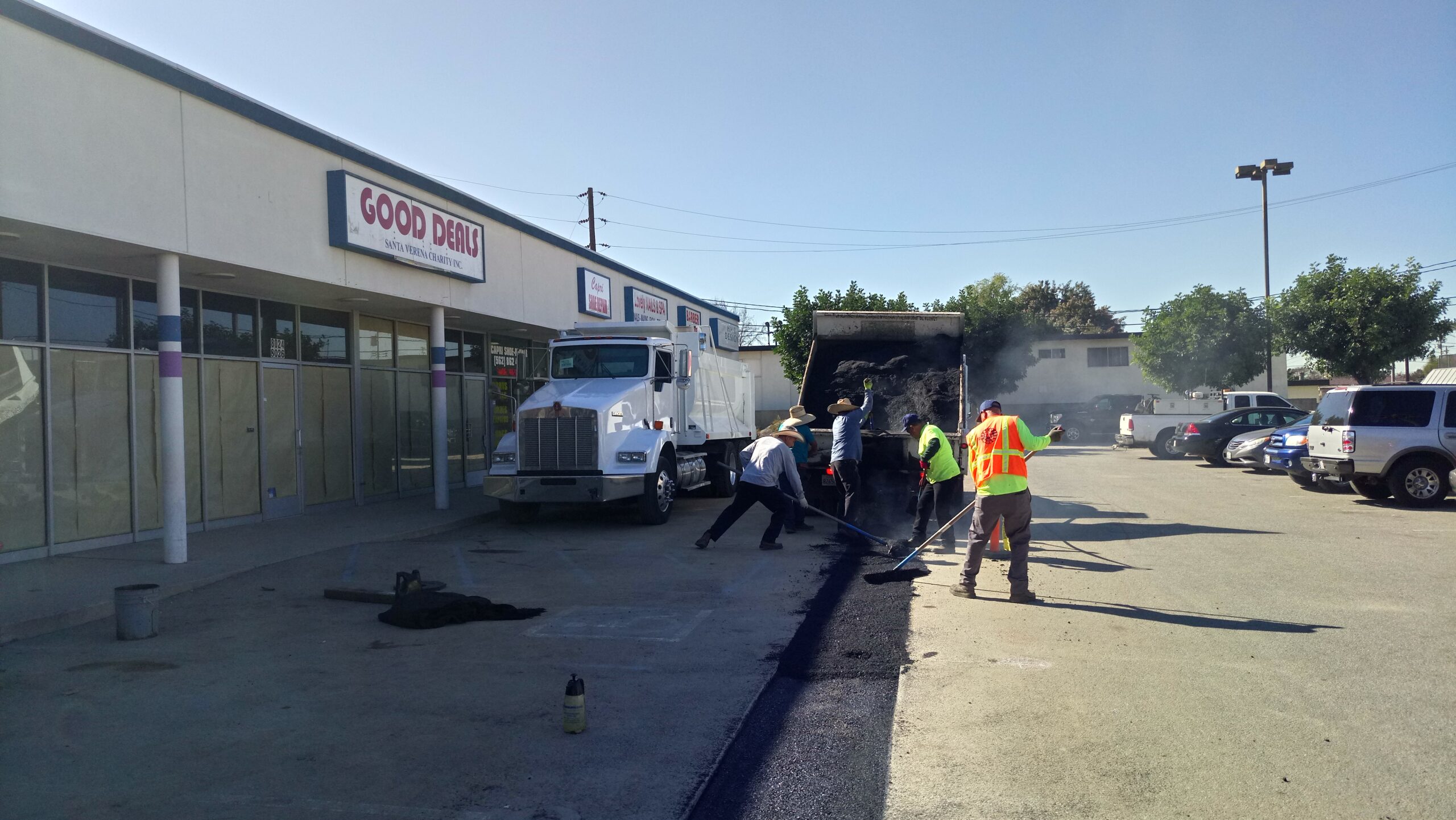 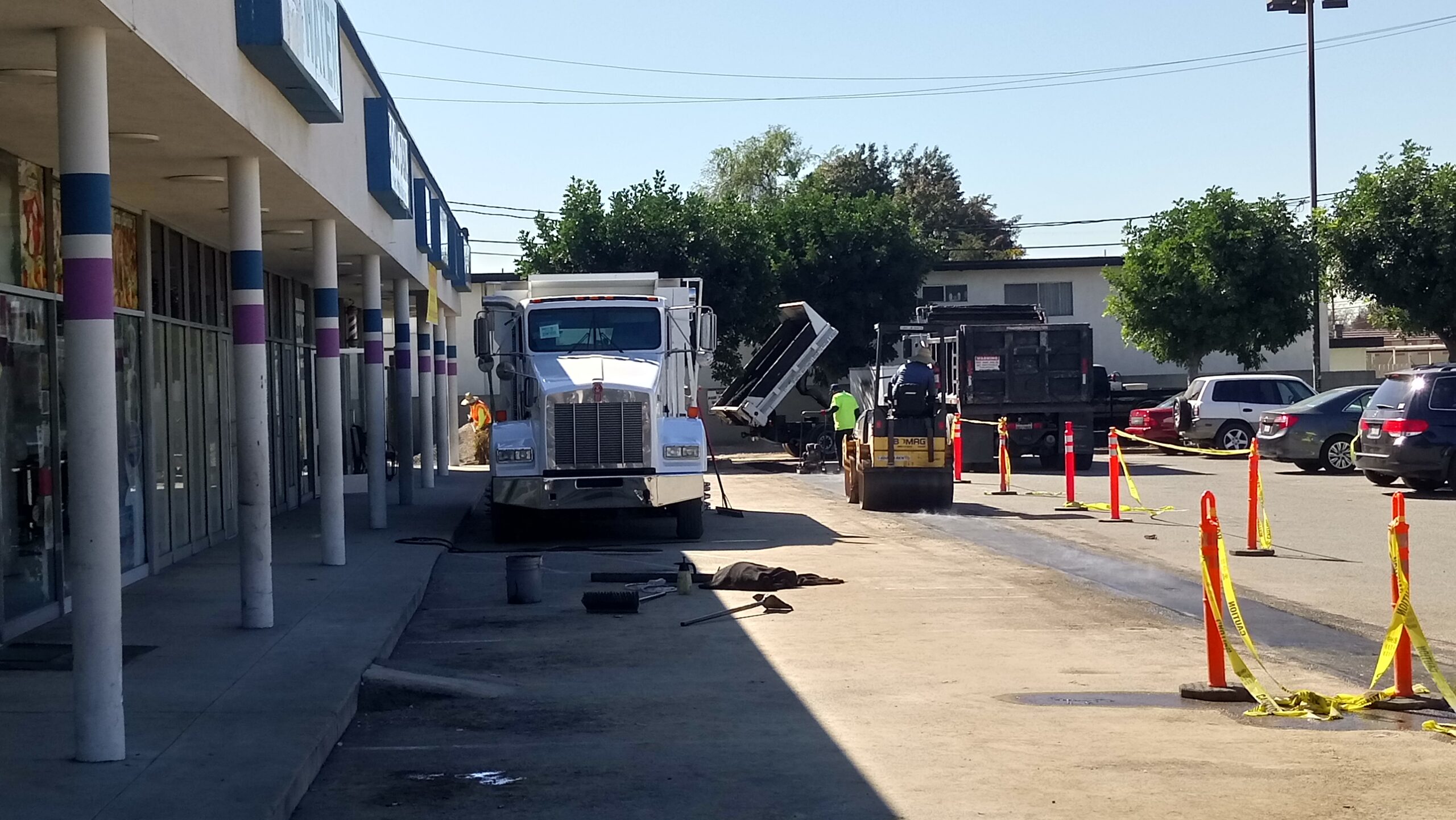 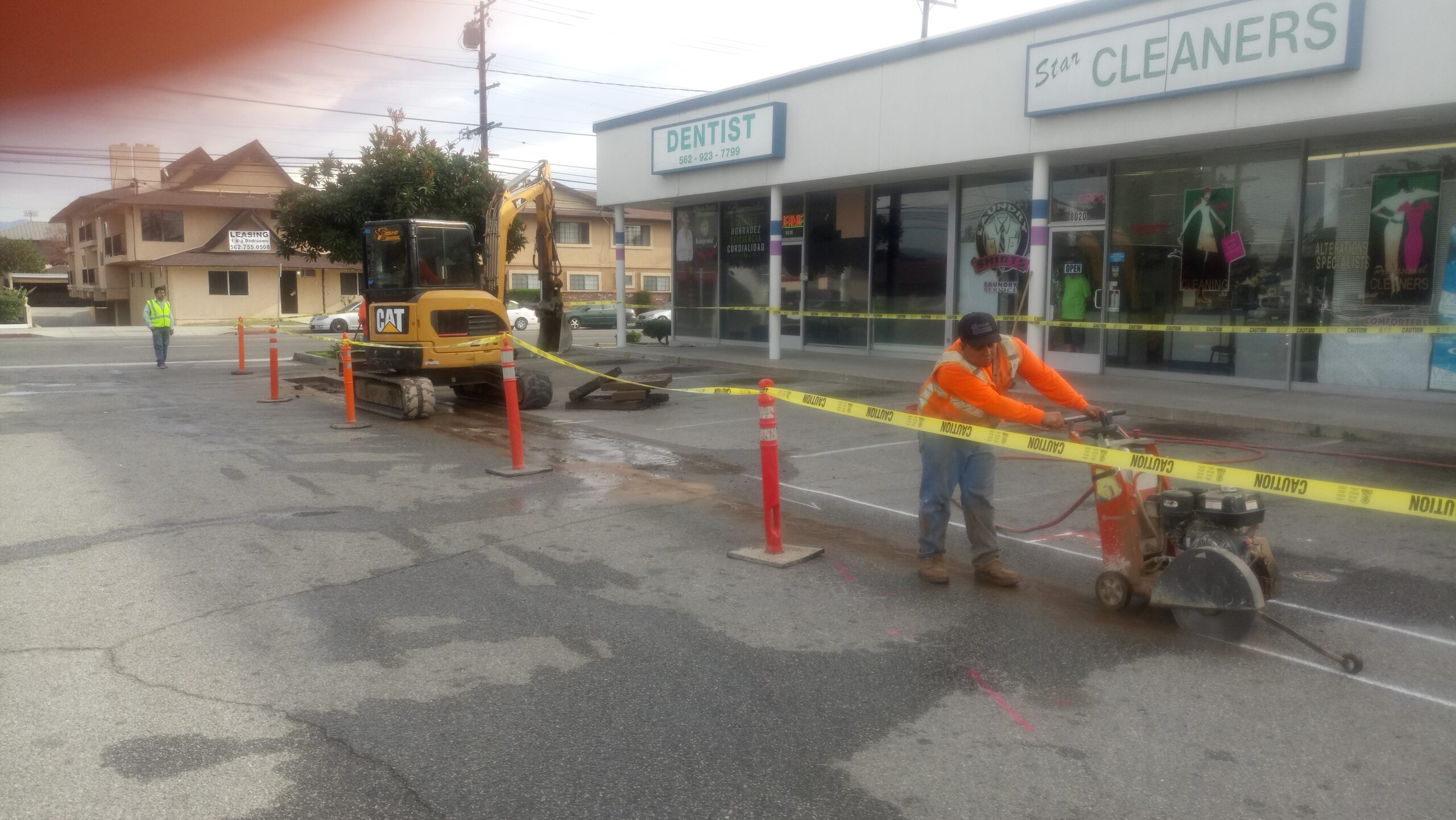 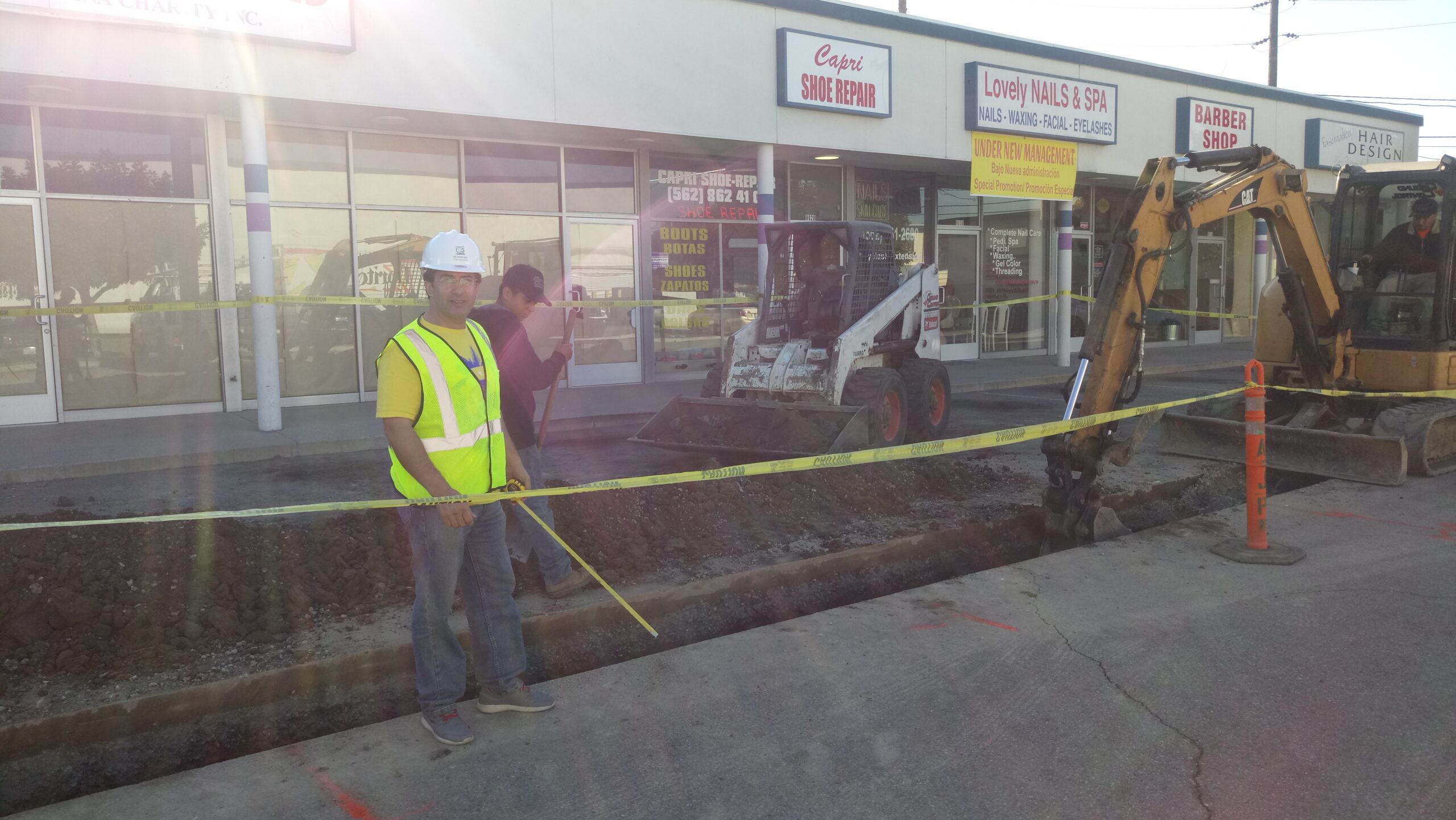 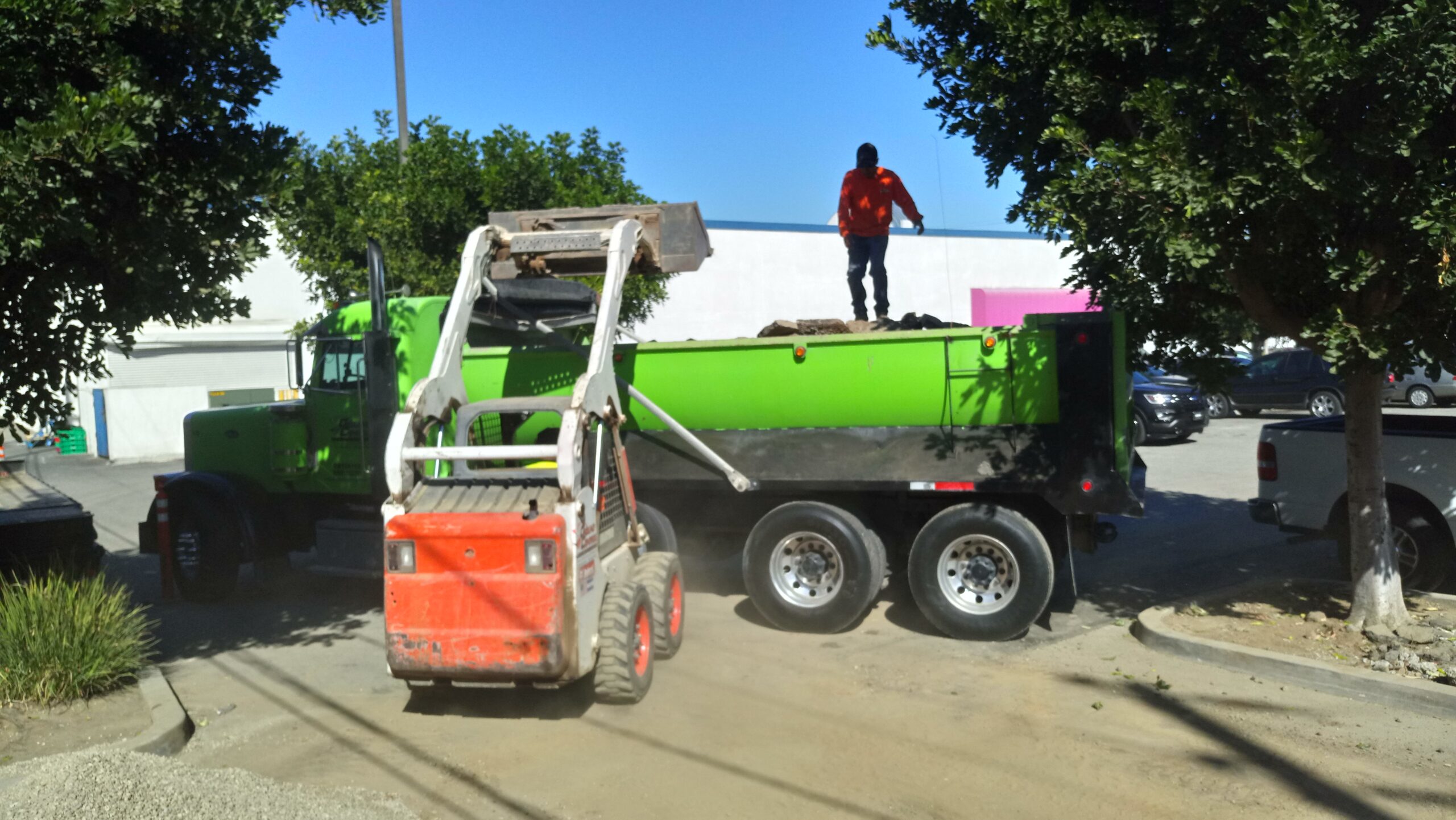 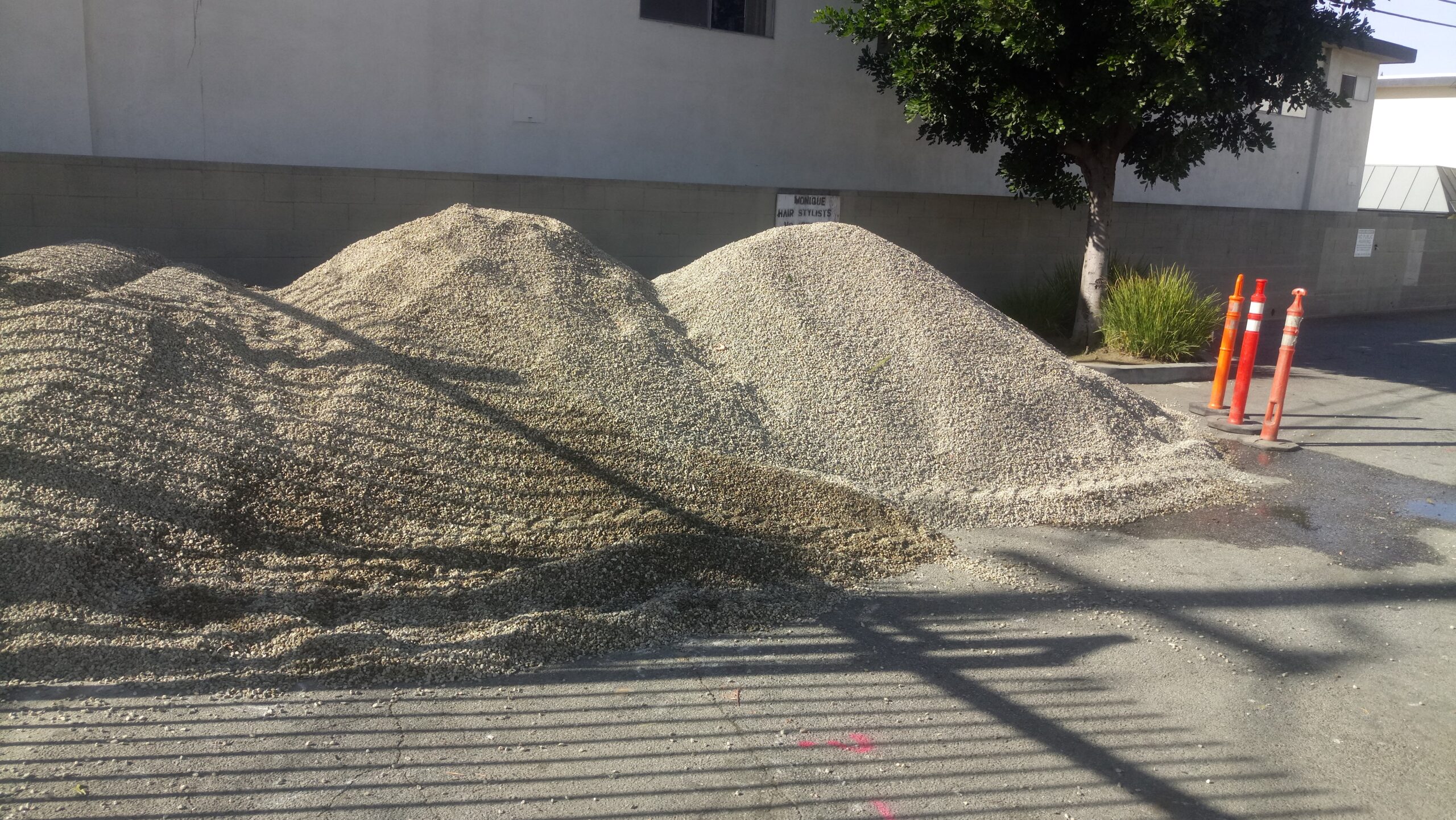 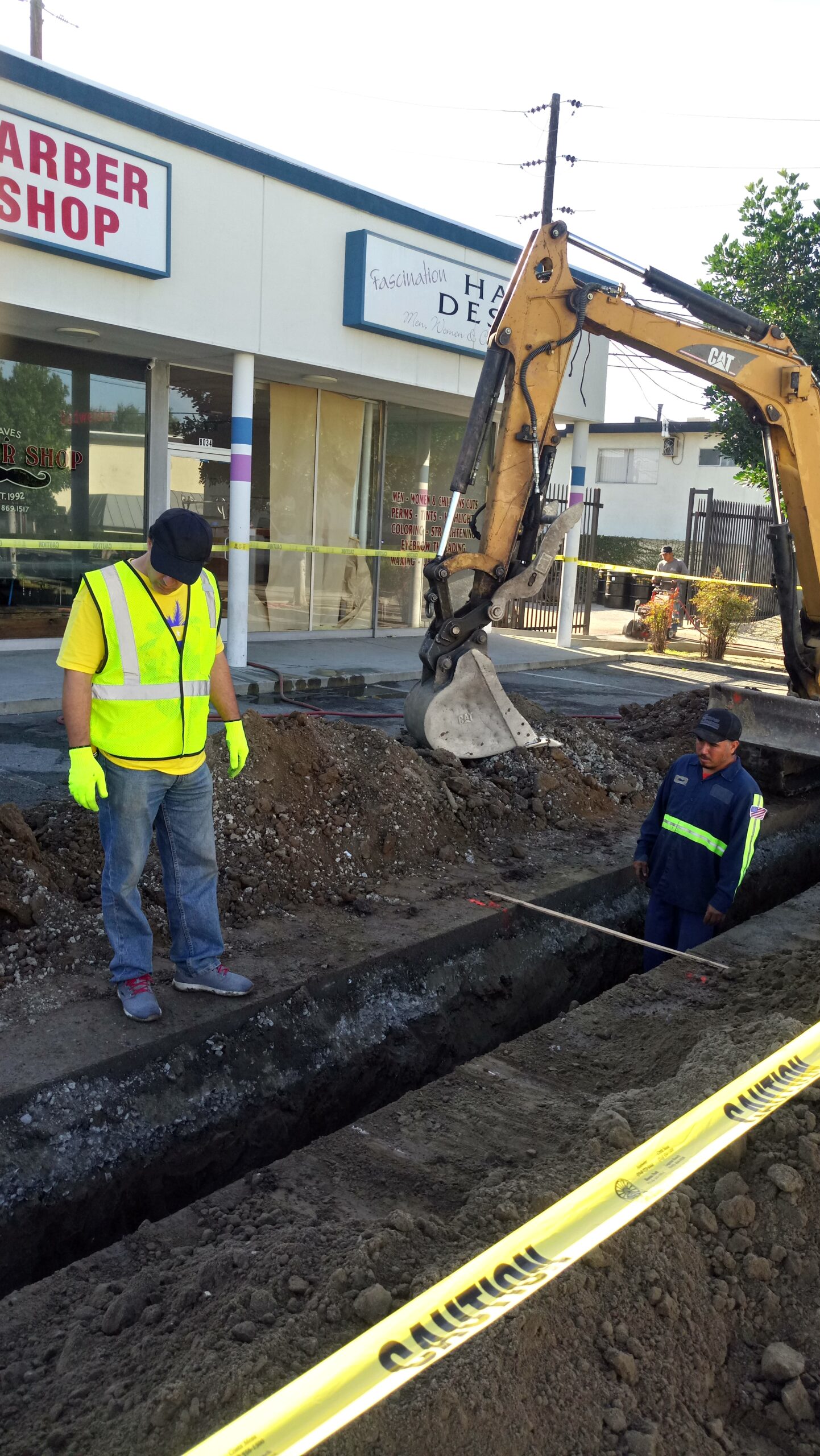 Sunpeak Construction worked on Soil Vapor Extraction & Soil Remediation of a Commercial Retail Center in Downey. Underground Soil was contaminated by Organic Solvent, Tetrachloroethylene, which was generated from the operation of one of the tenants, a Dry Cleaner. Tetrachloroethylene or Perchloroethylene or Perc is commonly used in dry cleaners for cleaning. The cleaning compounds were properly not kept in Teflon-Coated or FEP containers in a safe place and had leaked and eventually washed up in the surrounding grounds and in the soil below the building foundation. After scoping & preliminary investigations, various plans such as IRM, QA & QC Plans, Safety Plans, Traffic Control Management Plan, SWPPP, FARP, Hauling Plan were prepared by GSI Environmental and submitted to City of Downey for approvals and permits. Sunpeak Construction obtained permits and contacted Underground DigAlert to locate all underground utilities in the vicinity of excavation work. Sunpeak mobilized and set up all temporary facilities & utilities, barricades, and fencing to ensure all surrounding areas were safe. Monitoring Wells were installed at various locations to sample and test groundwater and make sure that groundwater was not contaminated. Boring samples of soil were obtained at 5-foot intervals to test the intensity of contamination. After the premise was safe, the layout of the plan was transferred on the actual grounds for construction activities. Asphalt was saw cut & removed and excavated to various depths. The trenches that were more than 5’ deep, were properly shored with Trench Boxes along with ladders cable of handling 250 lbs at less than 25’ access throughout the trenches and all open trenches were covered with Traffic Grade Steel Trench Plates per OSHA standards. SVE Wells were installed surrounding the retail center along with Horizontal Solid & Perforated PVC pipes were installed inside the trenches and wrapped with Pea Gravel and Filter Fabric. Filter Fabric is required to allow water and vapors to flow but keep the soil from clogging the perforations. All the pipes were routed to the location Pump / Manifold with Control Valves located on a concrete pad at the corner of the site. The pump was set in a corner of the property, out of way & properly enclosed with fence & windscreen fabric. After all, pipes were installed, all trenches were backfilled, compacted, and patched with asphalt. The pump will always operate and pumps air on one end and suction on another end to continuously extract all toxic vapors thru specially designed Activated Carbon Filtration System. GSI Environmental will need to monitor the site for at about 12 months and periodically take samples until the site will be declared clean.
Nick Azartash, President of Sunpeak Construction, believes there are many retail centers in California with similar contamination of Volatile Organic & Inorganic Compounds and need remediation as mandated by various agencies such as EPA, AQMD, CERCLA, NIOSHA, and ……… Sunpeak Construction has all the right credentials, such as A&B Licenses and Haz-Mat Certificate along with all OSHA training, experience, and manpower to do Soil Vapor Extraction & Remediation.